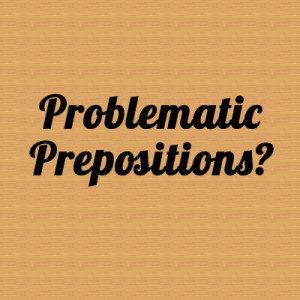 My experience over the last so many years tells me that students should never underestimate the importance of English Grammar rules. They could make / break your exam. Trust me, all of these were covered in your English classes in schools, which majority of you weren’t paying attention to! This post deals with 10 English Grammar rules for prepositions that have been simplified for you.

I have been an English enthusiast all my life. From being a small town guy (who was constantly laughed at for his English), to becoming a somewhat known Motivational Speaker – the journey wasn’t easy to say the least. On the way, I had to cross many a bump – some of them language related. I realized early on, that learning grammar is an inevitable tool to being a better communicator. If you don’t believe me, do read Why Grammar Is Important.

Can say from my years of toil, that what is covered below should be enough for you to go ahead and attempt correctly some very important questions on English, Grammar (preposition related) in any competitive exam – be it CLAT, CSAT, UGC-NET, Bank PO, CAT, GRE, GMAT, SSC, NDA or any that happens in India. The link for complete list of blogs on English has been given at the end of the blogpost.

Prepositions are a part of speech used to show a relation of a noun or noun equivalent (the object of the preposition.) to some other word in the sentences. Below are 10 English grammar rules for prepositions that will clear most of your confusions. Have also given examples and sentences to support the understanding.

Do not use of after all, unless the next word is a pronoun.

Among always implies more than two; between literally imp;ies two. Between however, is now often used for 3 or more items, when each is regarded individually.

However, between maybe used for more than 2 persons or things in order to bring each person or thing into the relation expressed.

Both at and in are used in reference to places. Mostly, in is used for larger places and at for smaller places.

In implies the position within and into implies motion without to within. In to is a two word phrase in which in is an adverb.

Besides means in addition to; beside means by the side of.

Both on and upon are interchangeable, although upon is a little more formal and emphatic. In the two word phrase up on, on is an adverb.

7. Some words like senior, junior, prefer, prior, superior, inferior, preferable, etc. are followed by to and not than.

8. Certain words are used in gerund (first form of a verb followed by -ing) along with prepositions.

9. Certain words are used in gerund without a preposition if followed by the first form of a verb.

10. Certain words are followed by different prepositions in different contexts.

A few posts on other English grammar concepts you might want to check out:

These English grammar rules for prepositions, and why just prepositions – for any other grammar concept – are important because they not only make you a better speaker but also a better writer. Whether it’s the WAT for IIMs, UPSC, AWA for GMAT or AWS for GRE or the entrance exams mentioned above, or it is just about writing a clear, coherent message – grammar is important. And it is not about being perfect. It is about knowing your art or trying to perfect it. Who wouldn’t want that!

Here are some blogposts that can help you improve your English. Do use them extensively, they are free 🙂