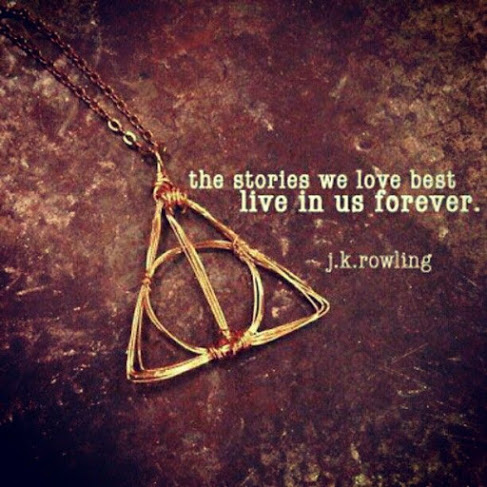 I do not have an answer to this question. But I wanted to know what makes Harry Potter book series so  inspiring to millions of people around the world, including my son. The fandom is obscenely huge, consists of millennials mostly and the author, J. K. Rowling, is still making millions every year even though the franchise ended more than a decade ago! But I am a Motivational Speaker; seeking motivation from anywhere is a part of the job! So, I asked another of my die hard potter fan friend, Arunima, to tell me all about it. This is what she told me:

I wouldn’t even know where to begin and where to end, when it comes to why Harry Potter book series is such an inspiration for me. It is an invincible part of my childhood, my reading habit and who I am. I have grown up fangirling, crying, laughing and loving all the story, the characters – everything. Even today, when I read it – something inspiring jumps up at me. The novelty of the novel never dies.

True Happiness is Devoid of All Desires

That sounds big. And I did not even realize the book talks about it till a year ago. It is in the very first book, when Dumbledore tells Harry about the mirror of Erised. It is a magical mirror that shows you the deepest, most desperate desires of your heart. And only a truly happy person look at his reflection in the mirror and see himself exactly as he is. Everyone else saw their reflection and found themselves standing with what they longed to see (or have) the most.

I think it is a very deep lesson about spirituality, written in a book for 11yr olds. The mirror of Erised (desire spelled backwards) shows a different reflection to anyone who looks. Your desires and how you see yourself are not universal. They are all inside you.

And while we are at it, I think Dumbledore is also one of the most spiritually advanced characters in the plot. He knows his flaws, he has worked through them, made peace with his sorrows and yet managed to do his duty to the last breath.

Yet, it is what makes you win all your battles.

Anyone who has read the books knows – courage is one of the central themes of Harry Potter’s story. And bravery not just by him, but his parents, his friends and his allies – they all make the story so very brilliant. 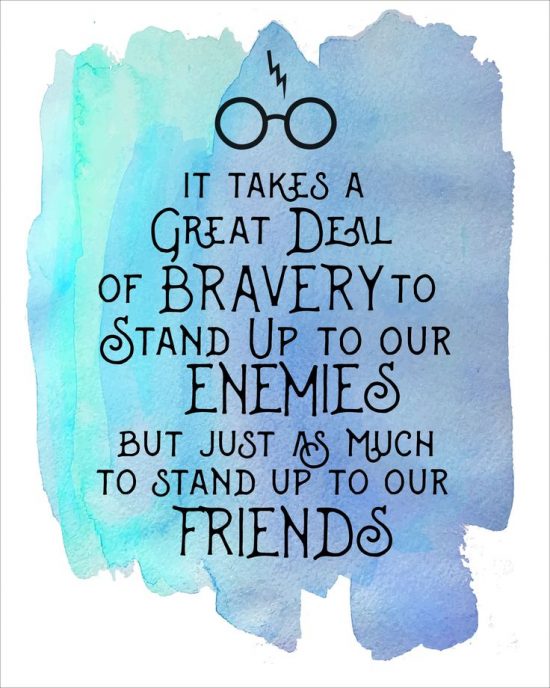 The books teach us that it is often difficult to muster courage. Be it confronting your friends if they are doing something stupid or walking into the forest to die if that’s what it takes to protect your loved ones – you will always be scared. But bravery also means that you work and walk through your fears, because you know – that the outcome you seek is much more important than you feeling scared.

And that’s why I am such a huge fan – of Harry, Ron, Hermione, Dobby, Dumbledore, Snape, Neville, Luna, Sirius – of all those brave characters J. K. Rowling wrote. They are fierce with their love, with their friendships, their will to survive and save – and most important of all, they are not afraid to be afraid. Harry Potter taught us that courage is not absence of fear, it is not about fearlessness. Mostly, it is about working through the things that scare you – and emerging with flying colours, if not broomsticks. 🙂

Even when your loved ones are not with you, they are always there with you.

The way Harry finds his father with him in times of desperate need, the way Lily lives on inside Snape, the way Ginny is ready to let go, the way Molly protects her children, the way Dobby takes a dagger to his heart to protect his friends – it is all crazy amount of love, packaged throughout the 7 books. 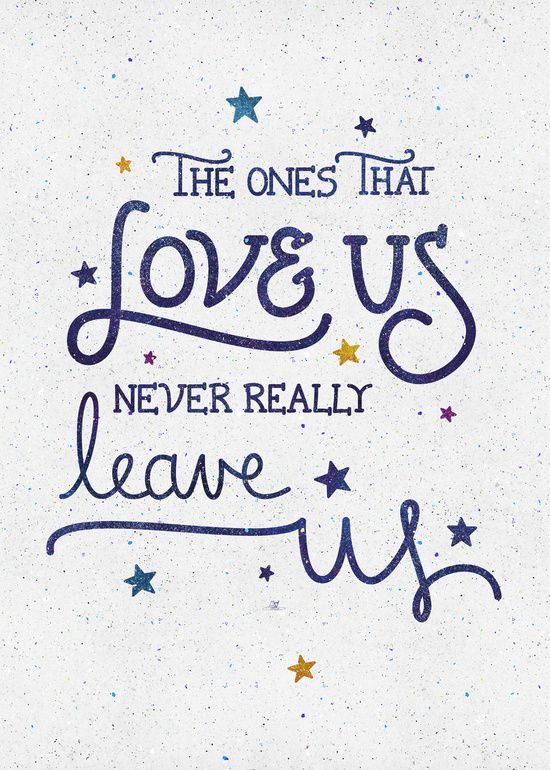 Harry Potter teaches us that the pain we feel for our loved ones, should become our strength to do the right thing, not the excuse to lose our way. Rowling is a wonderfully brilliant writer. The way she has woven the idea of non-obsessive love in the story is noteworthy and praiseworthy. She says –

It is okay to love and lose. Life goes on. Let that sheer love make you better, not bitter. Look at how Hermione puts all her might into saving the wizarding world even when Ron leaves, how Ginny is ready to let go of Harry, how Snape is happy as long as Lily’s soul is happy – and learn!

Don’t forget to put on the lights

Although this was a quote from the movie (surprising right! It is not a part of the books), it is one of the most inspiring Harry Potter quotes I have come across. Time and again in the books, Rowling stresses on the importance of light and warmth in life – be it magic or non-magic.

Be it fighting the dark, damp and twisted Devil’s snare or the cold, frightening inferi (zombie like creatures) or the very personification of depression, the dementors – fire is all you need. Let that fire be inside you.

I love this metaphor. It is so true. All you need is a little fire to fight the darkness – be it inside or outside. Fighting depression (Read dementors) is hard and the only thing that will work is good, happy memories. Putting this simple thought into powerful magic is a great way of telling kids (and adults alike) that “Happiness can be found even in the darkest of times, if only one remembers to turn on the light”. 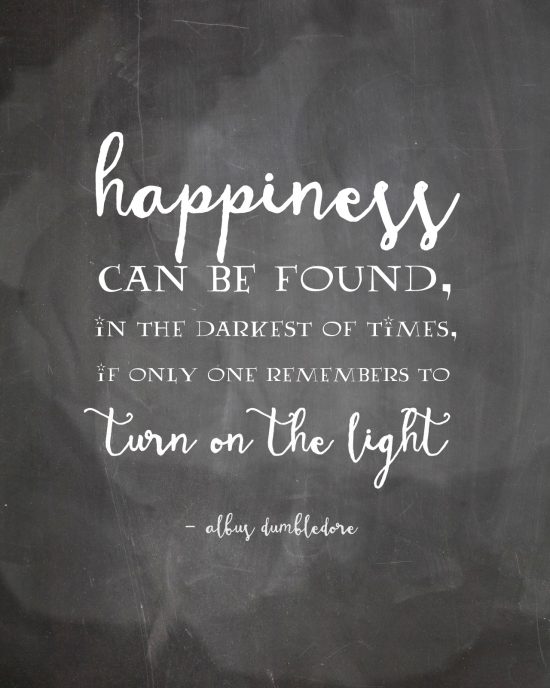 I learned most of these lessons later – when I read Harry Potter as a grown up. For the kid in me, it was mostly about magic. Much later did I realize – how beautifully written these books were.

Harry Potter taught me – it is okay to give everyone a chance to tell their story. We are often too quick to judge. The world would be a much better place if we just found a way to step back, not assume and use veritaserum (truth potion) once in a blue moon.

There is more to Life than Not Dying

I saw this on one of the fandom pages – Voldemort (the villain of the story) died at the age of 71. Dumbledore died when he was around 110. If Voldemort hadn’t been trying so hard to remain mortal, he would have actually lived much longer and happier.

The story talks about the beauty and importance of a pure soul, a soul that is not maimed by evil or murder, a soul that knows how to repent its mistakes.

I think it’s a valuable lesson for everyone. We worry so much about dying that we often forget to live and love those we live with. And this fear of not dying makes us do stupid, abhorrent things often. Take the example of Voldemort and his broken soul (broken into 8 pieces!) and the way he finally meets his match. No matter how powerful you are, what possessions you have, what intelligence you have – when you finally hit the coffin, you die in a mundane manner. You vanish into the same nothingness.

It is better to leave behind a legacy that people remember you fondly for, rather than being the nightmare people want to forget.

I love Rowling for writing some of the strongest female characters I have come across in literature. Harry Potter is one of the most feminist novels I have read. The males and females in the wizarding and witchcraft community hold equal places. They have equal say in inheritance, in work, in sports, in academia – everywhere.

Not many people notice it unless pointed out – that in the Harry Potter world, there are no separate men and women teams for their sports. You get in on pure talent and not because of your body parts.

And do not even get me started on Hermione. She is my inspiration. What a stunning combination of intelligence, bravery, beauty and kindness. She is not only the smartest witch of her times, but is also brave enough to embrace a battle when there is need, and focus on her career when all is fine.

I think we need more such role models in our lives – who know how to achieve what they set their hearts on.

I read this Harvard Commencement speech by J. K. Rowling and I understood what it takes to come up with a magnum opus like Harry Potter. I know a lot of people think it’s children’s book. Maybe it is. Because if this is what kids grow up with, I am sure they will turn into better adults. As for us adults, Harry Potter is an explicable love story we are not ready to let go of yet.

The books are inspiring, lovely and much fun to read. And what sort of a fan would I be if I did not add – they are much better than the movies 🙂

Do read them! And if you are looking for more awesome books to read, here’s a list of some fantastic books for your reading habit.

Read! For Fawkes sake 🙂 (True Potterheads would get this)