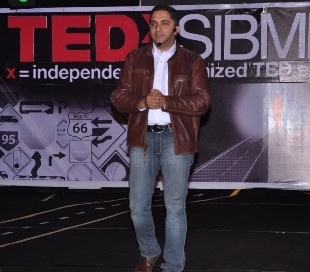 India is perhaps the only country where the largest numbers of people first become Engineers / MBAs and then decide ‘What they want to be in their lives’.  We usually pick up trends / road most travelled because — it is safe, tested & gives us an illusory feeling of ‘belonging to the mainland’. This motivational TEDx video from SIBM, Bangalore is an attempt to share my story of having done a PG in Fashion from NIFT, New Delhi & then going on to become a Motivational Speaker & a Corporate Trainer.

This less travelled road tends to get lonely some times. You’ll find in this video a few clever ideas to keep yourself going.  < The video quality is as we got from Symbiosis>

In the last few years; during Corporate Trainings I met not hundreds but thousands of young, apparently very educated professionals who are just enslaved in a cubicle city. A price tag (salary) has almost bought them out. Their free will looks so repressed & spirit almost destroyed. ‘Inspired life’ is totally missing.

Some of these people are very talented but they just are not able to summon the courage to go against the prevailing belief systems. They end up conforming to the normal ways of the society. Our society is such a clever bitch. It encourages & rewards conformism in order to buttress the status quo.

Only a tiny minority of people feel fearless & refuse to get bought out by the false security of an image / money flow. They take the ‘Road Less Travelled’ & that is what makes all the difference in their lives.

Anybody who has lived meaningfully has separated from the herd & sought the power within. Take the case of animal kingdom where all the powerful ones walk alone but the weaker ones graze together in herds.

For many years; I unsuccessfully was trying to be pleasing to others at the cost of my own life & dreams. Some 14 years back the society had kicked me down calling me useless. I had lost two consecutive jobs, was feeling soulless like a corpse within me. The nauseated feeling was very intense & rebellion was oozing out of my nerves.   My dreams were lying buried deep down somewhere under the layers of societal conformance. One day- I decided to exhume them all.

I decided to move out of this herd mentality. I decided to chuck all ‘Social burdens’ of what people will think / say about me. I did not have anything but just my belief in self that I could create ‘Entertaining Events’ which can help solve the problems in people’s lives. Now I realize — ‘That was all I needed then’.

(Here’s my story: Confessions of a Motivational Speaker)

One Life! Ordinary is so Boring? Do something which no one else has done before. Dazzle the world with your unique skill set & brilliance.

The rest of my videos (Motivational TEDx video + snippets of events) can be found here: Akash Gautam’s Videos.

May the FORCE always be with you,