150 Common Mistakes in English Grammar and Their Correct Answers 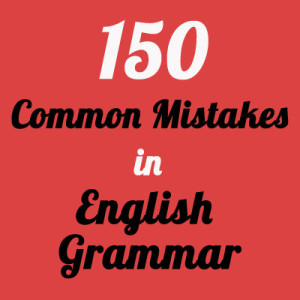 English Grammar is a majorly important section in almost all entrance examinations that are the doorway to the best colleges all over the world. And for the non-nerds and non-wizkids, these often become the deal breaker as they tend to make some very common mistakes in English grammar section. There always will be questions in Competitive exams like CAT, CLAT, SAT, Bank PO, GRE, GMAT, SSC, NDA, IELTS, TOEFL etc where one might end up pulling his hair asking – ‘I never studied such Grammar & I have no clue how to get this one right’.

I have tried to make this easy for you in this Blog. I am an avid English Enthusiast & have tried to compile here the most frequently asked miscellaneous concepts & rules of English Grammar in this blog. Grammar rules which usually find it difficult to be classified under one certain head / title but are important as you prepare for the grammar section of your competitive exams. If nothing, use it to smooth talk your crush into believing how awesome you are 😉

Covered below are 150 common mistakes in English grammar that we very often make. They will tell you how to prepare for CAT grammar, IELTS grammar and many other important competitive exams that you are planning to ace. I have covered a variety of English questions – which if your study right, shall give you good confidence!

Don’t get daunted with the number 150. It’s hardly the entire grammar syllabus for CAT and other exams because English is a vast language. But here’s how you learn it: these have been used in sentences. Pick 20 of them in a day and reuse them in other sentences. Let’s not get over bothered with rules here. I have a series of documents where we discuss some of these grammar rules in more finer details.

Please note:  The first sentence is incorrect and the second is correct.

I repeat. Don’t be afraid of the number 150. If you simply read this list 10 times, you will be able to cover 80% of the correct ones. Bass dhyaan se! Did you check the further awesome collection at the crazy Angrezi Dhaba ? I promise you will love it. Just knock these daunting English sections of competitive exams right out of the park with your new found skills 🙂 … And if you feel like giving up, drop me a line (contact details here). I will help you not do the stupid thing!

If you are looking for more tips, tricks and keys to understand more grammar concepts, you may check out the following links:

Do let me know about your views / doubts / queries in the comments below. Would be happy to clarify them. And don’t be stuck on this. People have gone to the moon and back. This is pretty easy. Nothing uphill or undoable. Nothing a little reading habit can’t cure 🙂