7 Awesome Habits that Inspiring Bosses Have 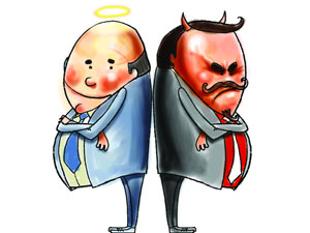 You just need few awesome leaders to take your organization to the next level. And you also just need very few people (at the leadership level) to bring the same organization fiercely down. If you are married to your job then bosses are like mother-in-laws. You just can’t deny or ignore them inspite of anything.

Bosses are a very important part of work environment and the reason why employees often choose to stay back or move jobs. People usually don’t change their jobs. They change their bosses.

Answer a few questions for me though –

If the answer to the above questions is “Yes”, let me tell you – you are among the lucky 0.001% in the corporate world existing on planet earth. Congratulations! You may now thank your stars 🙂 It is a sad reality. Most bosses are not so awesome and most employees not so lucky. The problem is – while people are often great employees, they do not turn out to be good bosses because they expect their colleagues to live up to the same perception of standard that they had of themselves. Or they succumb to their own increased performance pressure & trickle it down inelegantly to the people who report to them.

For all those who dream to be in the position of a boss someday, you might want to not fall into the trap of believing you are a good boss but actually being a dismal one! Here are a few awesome habits that inspiring bosses have– see if you could pick up some of these qualities!

Employees will never ever buy their boss’s commands if he himself is not doing (or capable of doing) what he expects them to do. During one of my Corporate events in Phuket, Thailand- the top boss himself arrived late & then in the day he admonished his team to be super disciplined. Crazy! They practice what they preach. You won’t find them wasting office resources. Some even care to switch off the lights and close the doors behind themselves. These small gestures enhance the boss’s ownership about the organization & lift him in the people’s hearts.

And such bosses do all this with a genuine smile and regard for everyone, like they really mean it. Because they do. While it is very easy to preach, and equally difficult to practice – the good bosses try to maintain a harmony between their thoughts, words and deeds. And try to ensure their colleagues and teams also follow the same!

Yep. You will never find them complaining to you about your colleague. If something is wrong, they will bring it up in front of everyone during meetings. But never behind closed doors. Inspiring bosses don’t believe in schoolgirl drama or petty gossiping. They say what they say with élan and in front of everyone.

They are good leaders. They don’t believe in pitting people against each other & indulge in secret drama (while somewhere trying to hide their own deficiencies). Rather, they understand that within teams, transparency is an important virtue. Gossiping is discouraged and honesty is encouraged, under the regime of such inspiring bosses.

Surprising, isn’t it? While the ordinary bosses do what they feel like, the inspiring breed listens to you. I am not saying they will put up with all your bull shit. But they have the ability to filter the good stuff. They are well trained in the art of listening!

Send them an interesting idea and request for a meeting and they will definitely hear you out with rapt attention. They will suggest you improvement points and share their own thoughts and experiences. You will always find a good audience in them. Of course this doesn’t mean that they extend this habit to make the office a mini daily kitty party. They listen valuing time and most importantly with a direction to the discussion.

If you seek for & value their opinions, they will guide you in the best they can. Their years of experience about careers genuinely reflects in the help they extend.

I have heard so many stories of good bosses adjusting themselves with the employee’s need for academic up gradation (usually an evening or part time MBA). They genuinely guide and understand.

My friend who works in a top consulting organization in Mumbai was going through a severe depression and was advised less stressful work. He talked to his boss and quite contrary to my friend’s belief- his boss understood and helped him come out of his bad period with patience and by making heartfelt adjustments to my friend’s work hours and responsibilities. The boss had won my friend over for a lifetime by doing that. Now that when my friend is OK and much better- he is making up to his boss in all possible professional ways. Winning ways are back between both of them after a small hiatus, personal mentoring & understanding.

The inspiring ones – you will find them finding time for their passions, no matter what. You will see them reading / running / gaming / playing – even in the middle of their busy schedules. And it is something you can learn from them. Having a hobby and pursuing it irrespective of all situations – is also a sign of their commitment. To themselves.

It is a way of telling you that only the ones who are committed to themselves, can be committed to their work and responsibilities. Inspiring bosses have a subtle way of doing that. Imbibe it while you can.

The way they maintain a work-life balance is worth learning. They are able to devote as much time as is needed to their personal and professional commitments. They pack super productivity into their work days and thence leave for their homes early. This helps them create better renewal time when with their family members. This is because -they know how to prioritize things and how to stay mentally sorted.

Praise is the biggest motivator of human heart. Good and inspiring bosses realize this very clearly. They always find and create a reason to praise people who report to them. And they do it genuinely and with energy (compared to 99% other bosses who do it very mildly, rarely and as if they are suffering from constipation). They know that when they praise a person it brings out his latent potential. Because after the praise he / she will now want to live up to that image.

You may be their favorite (although, inspiring bosses do not have favorites), but they won’t hesitate in giving you a piece of their mind if you do a mistake. And they are good teachers too. They allow you room for mistake and room for growth as well.

You must have heard of the “hygiene theory” of motivation. Good bosses are certainly a delight. A bad boss leads to a dissatisfied employee. But a good boss definitely leads to a highly motivated and happy teams! Such people belong to a rare breed of awesomeness. If you come across such bosses, do not let them go until you have learned a thing or two.

Also – whenever you become a boss, try to be an inspiring one! Not the one who looks like a patient of piles (& who wants to spread the infection down to his people as well).

This post was originally published at Dumb Little Man.