4 Costly Mistakes Most College Fests Do 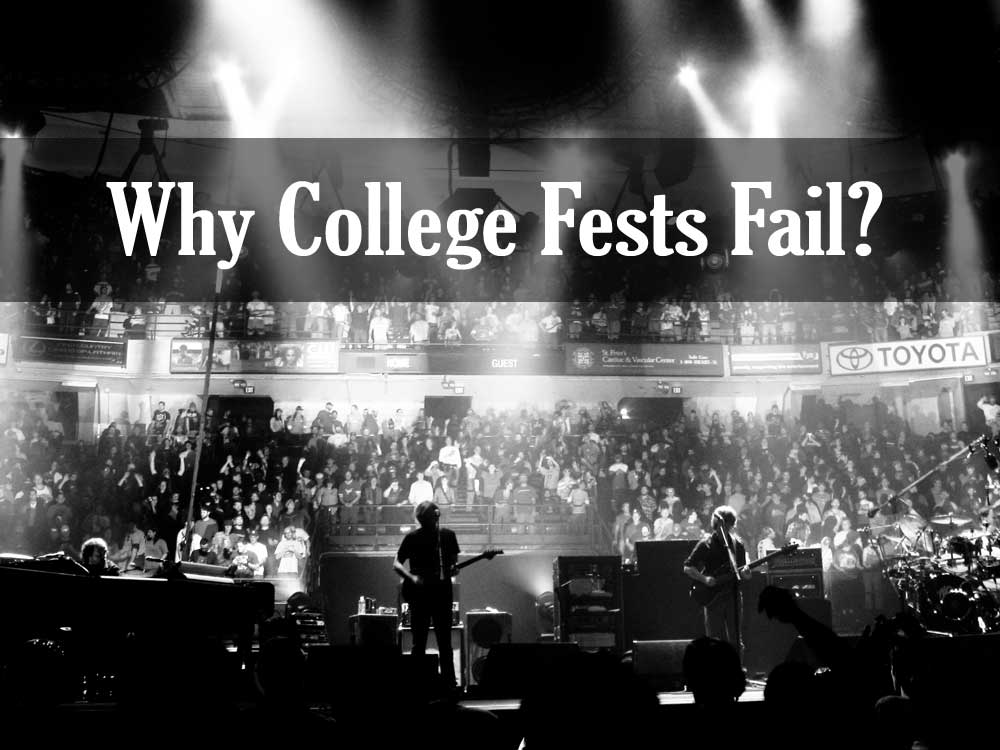 I naughtily picked up my favorite line for my Events during College fests from the movie ‘Dirty Picture’! It says:

Because, this is what I have understood in the last 16+years while working as a Motivational Speaker for the youth in their Fests. I am sure between you and me, we have seen the biggest and best college fests in India. They fizzle out for a combination of multifarious reasons. But “not enough entertainment” is one of the biggest factors.

Penning down 4 of my observations as to what makes your hard work on your college fests go to the dogs:

Or the lack of it.

There is a reason why school fests were more happening – not because it was a new thing back then, but cause the dance, the ‘western music’, the fusion were all a new phenomenon. It’s like watching K3G each time it runs on TV – You can’t get amused by Poo always!

Entertainment is one of the biggest reasons why fests die down. The activities, programs and functions planned are all rote & cliché and not of much attraction to the participants. You know that treasure hunt event that everyone wants to be a part of, or the Stress Interview that gets the crowd, it’s a hit because of the thrill and entertainment quotient!! While a lot is at stake with huge sponsorships and financials involved, it is not a good enough reason to play safe. The ones who play safe often come second. And the first prize goes to the risk takers. As a part of the OC, you know reimbursements are dicey anyway. Might as well focus on the content for a change 🙂

So, why don’t we make our fests more happening? Probably reason – these fests are a huge PR stint for the institutes and the clubs / societies concerned. Hence, succumbing to the pressure, most of them try to play safe and do not experiment much. When your club invites artists / speakers / performers that are known & slightly clichéd, it puts off the crowd & dampens the spirits.

Fests are a culmination of kickass minds sitting together to innovate and bring in creative ideas on the table. If they end up picking mundane / mediocre ideas for whatever reasons, a bad showdown is bound to happen. You should not, as an organizer, forget that while you will be organizing one fest only, the popular and clichéd ones have probably attended 10 such fests this season and their content isn’t really state of the art by the time they reach you. While there is nothing wrong in this, you need to probably sit down with them and check if what they have to say is what your audience really needs or not. It’s important to understand that the reason a Mood Indigo is successful or a Goa Fest is where everyone wants to be is because they took the risk to think out of the box – and that’s when the funds pour in!

Sadly, this should just not be the reason for fest fails, but it is. I will tell you what happens –

The committees spend so much time planning and politicizing the fests that very little time actually remains for letting people know about it. Barring some of the most famous college fests in India, most colleges reel under this fault. But think about it, the whole reason you are working so hard is to make a mark! If no one (beyond your girlfriend who has fought with you for not giving her enough time and your mom who is tensed you’re not eating enough) knows about your fest then there really is no point!! Stop marketing it to them, market it to the world.

PS: changing your profile picture and cover picture one week before the fest is not marketing!!

I mean, surely the planning begins months in advance but the state of their marketing affairs tells me – not much thought is given to the publicity side of it. This again has 2 components. Digital marketing & internal marketing.

In this ‘online generation’, so many innovations and ideations can be made possible with the digital marketing aspect – both initial buzz creation and real time marketing. Each and everyone of you have so many Whatsapp groups, PhDs in making snapchat stories, so many friends, connections, instagrams and selfies, followers and circles, why not use that for your fest- create competitions, fun facts, post dubsmash videos if you want – just get the fest #trending!! Cause that would be a first fest trending (if you want, you can make a night out of it, get together to just trend it! Believe me one night is enough!) But, I guess, people are preoccupied with other ‘important things’!! Hello marketing majors? Hibernating are you? If you are short of ideas, here are 11 Ways to Market your Fest.

Let us talk about the internal marketing component here. Surprisingly, apart from the immediate friends of the members of the organizing committee and student council involved with the fests, the rest of the junta doesn’t really know what’s happening. Some go on trips and some just keep catching up on sleep.

Sometimes it’s the improper planning & scheduling that leads to clashes too. My experience says – clubbing cultural activities with parallel management / technical competitions is always a bad idea. There are people who want to be in both but tend to miss out. Besides, cultural activities and fun sessions like dance / music competitions, drum jams, jamming, beat boxing, impromptu dance, band etc. are the major crowd pullers. Not having parallel sessions would really boost the attendance in either of the sessions. This is something a lot of fest management forget.

You shouldn’t need to force the crowd in and lock them! It’s time you stopped forcing the first years to fill the seats and use them to spread the message more effectively and create a buzz that makes people want to attend your fest!! Remember, Disseminating right information at right time in the right & interesting way is very crucial for pulling both – external and internal crowds.

The organizing committee is the only chance you’ll get to choose your family. Literally. You are going to spend so much time with them that it’s going to replace your ‘social’ time. But remember, if you choose a friend, you are probably going to do your work and his/hers cause as in most cases for most of the members, it is a CV point & a matter of pride to pin that “convener” badge. Not interest.

It is true. The college fests are often wrought with a lot of internal power politics among not only student members but committees as a whole and sometimes faculties too, but if the ultimate goal is to make the fest successful – it’s time hard-work is rewarded and not ass licking! Perhaps, a more stringent and transparent selection process could be used for selecting the core team – powerful & sensible people who know exactly when to control the reins and when to let go.This would also reduce the animosity that gets created amidst the batchmates when they don’t get into the council, and later choose to ‘boycott’ the fest!

The right people can make all the difference to a fest! Honestly, being in the OC isn’t a piece of cake. It requires tremendous amount of patience to be the link between the faculty, the students, the external colleges, the sponsors, the media partners, the food sponsors, the print people and everyone! Might as well choose the best of the lot- I have seen the best ones and the bad ones. They can make or break the entire fraternity.

Humongous effort goes into pulling off College fests and behind all the fun, it is serious business. It’s almost like an entrepreneurship venture!! Behind all the frolic, the backstage is always a chaos, a constant drama, contingencies, emergencies, lost things, missing people and broken expectations. But they are fun. They are your babies. Your pride. (A few snapshots of the hoopla of College Fests that I have had the chance to enjoy)

Don’t let them fail when you know what it is that’s causing them so much trouble. Don’t let your fest fizzle out just because you ran out of x-y & z factor! There’s really no point in leaving the business unfinished – is there?